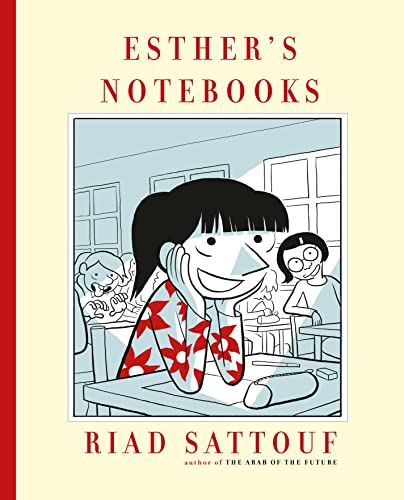 Sattouf (The Arab of the Future series) captures the unsentimental, wickedly funny realities of childhood in this collection of his inspired weekly comic, first serialized in the French news magazine L’Obs. The strip is based on conversations with a talkative young daughter of Sattouf’s friends. Esther, a self-possessed Parisian who grows from nine to 12 over the course of the volume, all but leaps from the page, dishing dirt from the school playground and sharing wisdom like “if you’re blonde and bendy, you’ll succeed” (exhibit A: Beyonce). Esther’s preoccupations change over the years, from playing pretend and feuding with boys to crushes, pop culture, politics, and her own future life; she tries her hand at writing and dreams of becoming a YA editor. Sattouf draws her dispatches with wry humor, crowding the pages with busy, squiggly characters (they are bendy) and dialogue that curlicues around the art. The comic is, above all, ruthlessly honest about childhood: kids are casually cruel, adults are unimportant much of the time, society is obviously shallow and materialistic, and terror sometimes descends out of nowhere, but so does joy. As Esther progresses from losing teeth to getting zits, she remains an unforgettable guide through the perilous world of growing up. Readers will laugh through tears as they follow her eye-opening exploits. (Jan.)

Correction: An earlier version of this review misstated how the author came to know Esther.