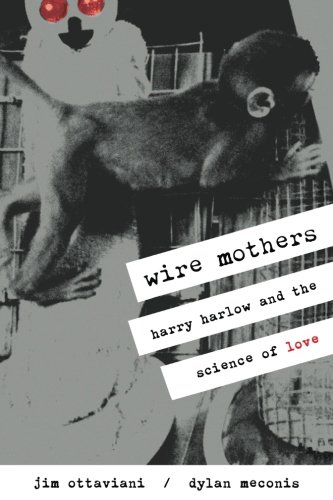 Wire Mothers: Harry Harlow and the Science of Love

his nonfiction graphic novel retelling psychologist Harry Harlow's famous experiments is as disturbing as it is excellent. “We'll show you what love looks like—and what it does,” says the young researcher, as he turns to TV to make his case after regular scientists reject his experiments. Harlow showed that rhesus monkeys preferred the soft, cloth stuffed-animal mother over wire surrogates, even when nursed by the wire doll. The famous images of the scary “cloth mother” and the even scarier “wire mother” has great cultural weight, but the real drama of the story Ottaviani tells is the contemporary scientists who won't admit the word “love” into their clinical language. Harlow's journey is tinged with subtle class and immigrant issues—the big-jawed, jowly figures, drawn with meaty shadows, express these divisions wonderfully, and help give Harlow emotional weight as he simultaneously finds success and sinks into alcoholism. The repetition of the term “proximity,” how scientists explained away love, is chilling, and the largely forgotten Skinner boxes and the theories behind them give the work a sense of deep foreboding as a cautionary tale of how behaviorists once tried to declare affection to be scientifically unsound.

Enter Ghost
Enter Ghost
Hammad (The Parisian) offers a soul-stirring and dramatic tale of a Palestinian family’s exile and reconciliation. Sisters Sonia and Haneen Nasir grew up in London in the 1980s Continue reading »

Daughter in Exile
Daughter in Exile
Bisi Adjapon
Adjapon (The Teller of Secrets) chronicles a Ghanaian woman’s wrenching story of migration, disillusionment, and resilience. Lola has an embassy job in Dakar, Senegal, in the Continue reading »
chevron_right